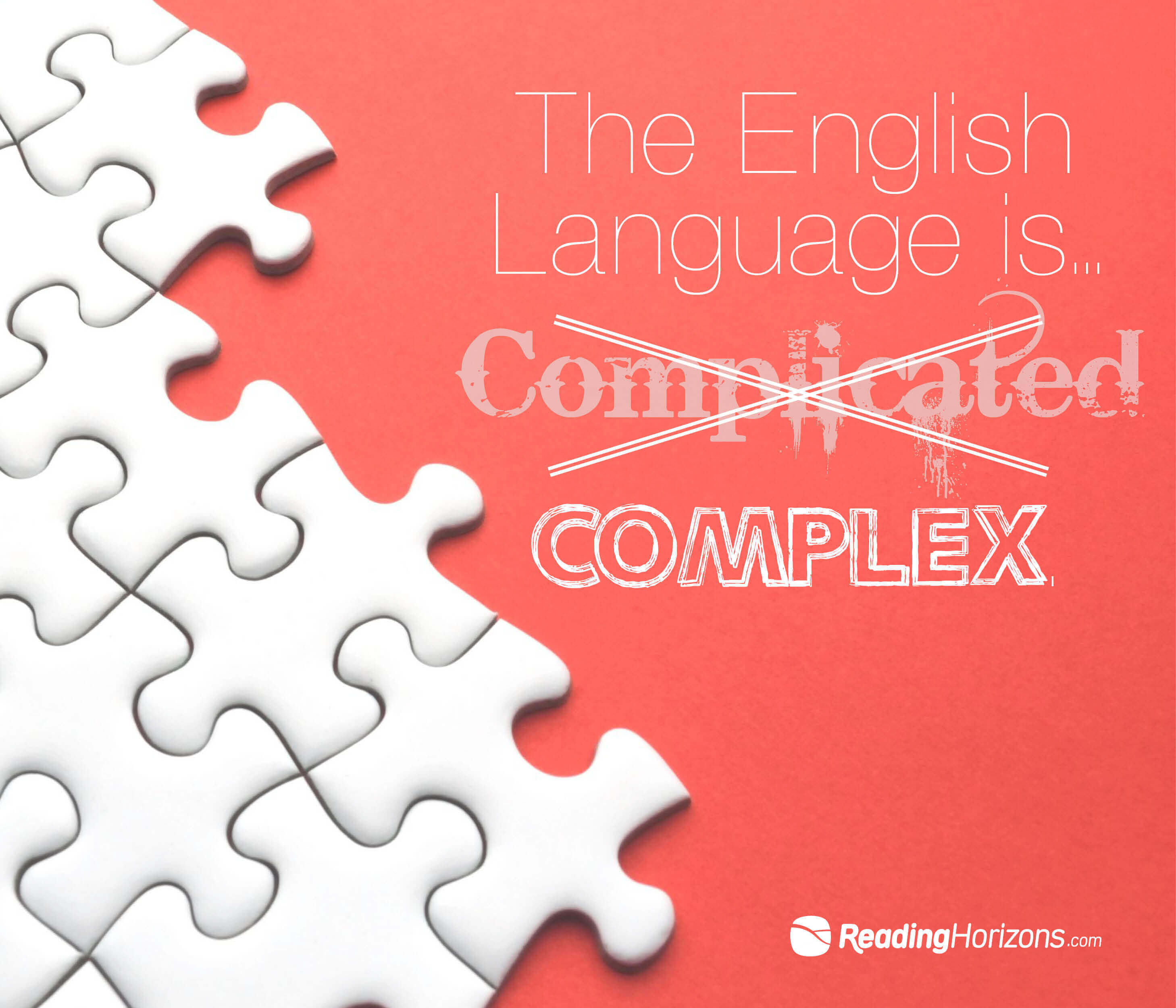 Anyone who has ever put together a large jigsaw puzzle knows the level of commitment it takes to accurately combine what may initially seem like a million little pieces into a perfect replica of the picture on the box. At first, it may seem overwhelmingly complicated until you realize that there is a pattern and a system for assembling the pieces.  My personal modus operandi is to identify the edge pieces and use them to create a frame then sort the remaining pieces by color and shape. Once I get to this stage in the process, the puzzle seems to change from overwhelmingly complicated to merely complex. This transformation not only prevents me from abandoning the puzzle all together but it allows my usually latent obsessive tendencies to thrive until it is complete.

Consider a puzzle whose pieces are in the shape of each state in North America, for example. The puzzle’s complexity manifests itself in the fact that there are interconnected parts but the level of complication involved in completing the puzzle would most likely be fairly low because each piece is very distinct. On the other hand, a traditional jigsaw puzzle with many similarly shaped pieces would be more complicated than a puzzle with 50 distinct shapes. Large areas of plain color or similar colors on a puzzle, (e.g. a puzzle depicting a lot of black and white dice) could further complicate the process by making it unclear how the pieces connect.

Understanding the distinction between the meanings of the words complex and complicated will help explain the third misconception about phonics instruction.

Misconception #3: English is too confusing to make phonics instruction worthwhile.

If you have not said it before (and who hasn’t?) you have certainly heard people say something like, “English is so complicated, confusing, inconsistent, crazy (choose an adjective) that it is amazing that anyone learns to read and write at all” or “There are so many rules and exceptions to the rules that it makes the teacher’s job difficult and just ends up confusing the students.” However, these sentiments are misconceptions. English, though it is a complex language, is not as complicated as people may think. There is order and consistency to the English language that becomes apparent with proper reading instruction. The problem is not with the language itself; rather the phonics instruction (or lack of phonics instruction) that the majority of students have received.

English is systematic, consistent, and predictable even though it is complex.

In 1963 Thomas Clymer analyzed the utility of 45 arbitrary phonic generalizations that were being taught in four basal programs at the time. Analyzing a list of 2,600 words he concluded that only 18 out of the 45 phonic generalizations were at least at a level of 75% utility. For example, Clymer found that the generalization commonly referred to as “when two vowels go walking” is only effective 45% of the time. This generalization is true if we apply it to all adjacent vowels but we find that when we explicitly teach specific combinations we find results like these (Johnston, 2001):

Here are some other facts about the English language (Moats, 1995):

Fifty years, and many basal programs later, his work is still cited by those who think phonics should not be taught or should only be minimally addressed. Clymer’s only focus for word analysis was letter-sound correspondences. As it turns out, English is more complex than simple sound-letter correspondences (though they are very important). There are many ways to analyze a single word like the word unreachable.

Letters: u-n-r-e-a-c-h-a-b-l-e (this is usually the only level of analysis on a typical Friday spelling test)

Morphemes (units of meaning): un (prefix meaning “contrary to”) + reach (meaning to “arrive at, get as far as”) + able (suffix meaning “capable of, fit for, worthy of”) =

Whole Word: unreachable (meaning: not capable of getting)

Fourteen years after Clymer’s study, Hanna and Hodges (1971) analyzed a collection of 17,000 words. They concluded that 77% of those words could only be spelled one way making evident the consistency of English letter-sound correspondences. So what helps to inform the spelling of the other 23 percent? That question can be answered in part by examining the historical basis and structures of written English. In the book Unlocking Literacy, Marcia Henry (2010) describes three languages of origin that have had the most influence on the spelling and pronunciation of words in the English language.

Latin: Words of Latin origin are words that are typically used in more formal settings. These words are often found in literature or social studies textbooks starting in 3rd grade and up. Words of this origin are longer but are more consistent with letter-sound correspondences than words that originate from the Anglo-Saxon layer of language. Approximately 55 to 60 % of words in the English lexicon originate from Latin. It makes sense that Latin word roots become more important to learn beginning in 3rd and 4th grade because they contribute the most to a students’ grade-level vocabulary growth, decoding strategies, and spelling accuracy. Latin is also the basis for Romance languages such as French, Italian, and Spanish so knowledge of Latin word roots will also aid in learning these languages.

Greek: Words of Greek origin are found in academic vocabularies related to subjects such as science and math. In this layer of language, students learn new spellings for sounds that they have already learned (e.g. ch for the /k/ sound in the word chlorine). Even though Greek contributes merely 10-12% of English words, students can learn to read, spell, and understand many thousands of words by learning Greek word parts and their meanings (e.g. micro, scope, bio, graph, meter, auto, tele, photo, etc.)  Knowing Latin and Greek word parts and their meanings will also help anyone decipher their own medical records (bonus!).

Teachers who understand the complexity of English increase their capacity to empower all readers with the ability to read any word they encounter. This is especially important considering that there are over 650,000 (by some estimates over a million) words in the English language of which about 200,000 are in common use. We cannot expect any reader to memorize every word they read. Even the most exceptional memory only has the brain space to memorize about 2,000 whole words (McGuiness, 1997). That is a lot of hard work for students to endure for such a limited payoff. As a nation we start seeing the effects of whole word memorization around 3rd grade where the number of proficient readers diminishes as text becomes more complex.

Rather than waxing verbose in this section, I will just illustrate this point with words that would seem like exceptions UNLESS you have access to the following information:

some: Before the printing press, scribes were used to copy books, using a quill pen no less, and had a hard time discerning letters formed with similar up-and-down strokes such as the letters m, n, w, u, r, and v. So… in order to tell them apart, they changed the letter u to an o each time it appeared next to one of the letters listed above. The pronunciation stayed the same, in this case, and the spelling changed so the letter o in words like come, done, love, month, and brother is pronounced using the short sound for the vowel u, /ŭ/. This phenomenon even has a name. It is called The Scribal ‘O’ (Google it).

colonel: According to the Online Etymology Dictionary the history and meaning of this word refers to a military person who was put in charge of a COLumn of soldiers, hence the spelling c-o-l (that information is enough to help me remember how the meaning and the spelling of the word are connected). The pronunciation can be explained by the origin of the word. In the 1600’s the Middle French word was spelled coronel then changed to the Italian form colonnella. Throughout the process of translating Italian military manuals (17c.-18c.), pronunciations for r and l coexisted but eventually the earlier (Middle French) pronunciation prevailed even though the (Italian) spelling stayed the same.

doubt: Historically, the meaning of word doubt refers to “being of two minds” (i.e. unsure about something). Get it? Two means double so that explains the letter ‘b’ in the word doubt (if I had only known that during my second-grade spelling bee. Sigh…)

sign: The long i sound in the word sign has to be spelled i-g-n so that when the word transforms into the word signal (both words have nearly the same meaning) then the integrity of the meaning can be maintained. Since the word signal is highly phonetic, wouldn’t it be easier for students to remember the spelling for the word sign by relating the two? (Shake your head “yes”).

island: At first I surmised that this word had a relationship with the meaning “isolated land” but I soon learned that is not the case (although that could help some students remember how to spell it). The Anglo-Saxon derived word was originally spelled ieland (meaning watery land) but it now contains the letter s instead of e as a result of people confusing it with the similar but linguistically unrelated word isle (which is a derivative of the Latin word for isle; insula, and is more closely related to the word penninsula).

There you have it. Words that were once seeming exceptions now have explanations.

Consequences of espousing this misconception:

What we can do:

I certainly don’t claim to know everything about the English language but I can say that after years of reading, writing, teaching, and learning about the language, it is no longer complicated to me. I have learned that the complexity of the language helps students to learn the spelling, pronunciation, meaning, and history of many words that they may not otherwise understand on such a deep level. When we understand these concepts for ourselves, it becomes even more rewarding for us as teachers to see this knowledge come together for our students piece by piece until the puzzle is complete and students can read, spell, and comprehend independently. Puzzle on, friends!

Learn how Reading Horizons elementary reading curriculum and reading intervention program simplify the complexity of the English language for beginning and struggling readers.

Stay tuned for Misconception #4: Most teachers know what they need to know to effectively teach phonics (in other words; All I Need to Know About Teaching Reading, I Learned in College)

This is brilliant and so obvious really. Very interesting indeed.

It is an informative article. Being a special educator I must say if you use the right methodology to teach phonics to students who have learning difficulties, they can learn more quickly and also enjoy the teaching sessions. The sessions are more enjoyable to them!